This Women Is A Legend!! Pro Muay Thai Fighter

What happens when a skinny nerdy girl – who’s actually a world renown Muay Thai champion in disguise — asks a couple muscular male martial arts gym trainers to teach her how to spar? Hilarity of course, but not for the reasons you might think. In a viral YouTube video featuring skilled Muay Thai champion Germain Yeap, viewers witness the problem with stereotyping – it can make us look like fools when they’re wrong. In the video, martial arts champion Germain Yeap is seen beating the crap out of a male gym trainer after setting up an elaborate prank to make him think she’s a hopeless nerd.

Walking into a Malaysian gym dressed in pink flowered shorts and a blue t-shirt, with glasses and long unrestrained hair, Yeap definitely looks like she hasn’t a clue how to even begin to fight anyone.

After some time has passed we see the Muay Thai champion approach one of the gym trainers and ask him to teach her to spar. The guys seem pretty reluctant, one even saying, “I just don’t want to hurt you.” Little do they know the epic prank Yeap is about to pull.

After a few moments of cajoling one of the trainers decides to take the geeky looking Yeap into a ring and spar with her a bit. Yeap continues to play the pranking role of a hopelessly nerdy girl in the gym, even tripping into the ring as she enters it. Once in the ring, Yeap continues the farce for a few minutes more, throwing some feeble punches but spending most of the time with her face covered in fear. 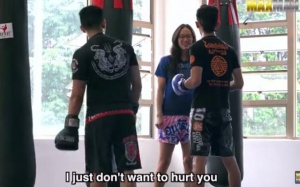 Check out the pro muay thai fighter below don’t miss out!