Facts! Where Does Your Fat Go When You Lose Weight?

Where Does Your Fat Go When You Lose Weight?

Now A Lot Of People Doesn’t Know About This Simple Fact! This Researches From Few University Has Proven That Fat Does Not Transfer To Energy or Heat, 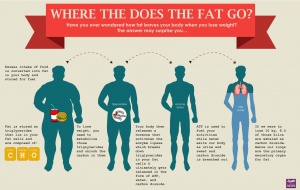 We talk a lot about dieting and burning off fat, but we actually have a lot of misconceptions about weight loss. Some people think fat is converted into energy or heat—a violation of the law of conservation of mass—while others think that the fat is somehow excreted or even converted to muscle. I was told early on that you can never lose your fat cells (adipose) once you gain them…they just shrink if you work it off.

Well, according to Andrew Brown from the University of New South Wales and Australian TV personality (slash former physicist) Ruben Meerman, when you lose weight, you exhale your fat. Their new calculations, based on existing knowledge about biochemistry, were published in the British Medical Journal this week.

“There is surprising ignorance and confusion about the metabolic process of weight loss,” Brown says in a news release. “The correct answer is that most of the mass is breathed out as carbon dioxide,” Meerman adds. “It goes into thin air.”

Excess carbs and proteins are converted into chemical compounds called triglycerides (which consist of carbon, hydrogen, and oxygen) and then stored in the lipid droplets of fat cells. To lose weight, you’re attempting to metabolize those triglycerides, and that means unlocking the carbon that’s stored in your fat cells.

Then the duo calculated the proportion of the mass stored in those 10 kilograms of fat that exits as carbon dioxide and as water when we lose weight. By tracing the pathway of those atoms out of the body, they found that 8.4 of those kilograms are exhaled as carbon dioxide. Turns out, our lungs are the primary excretory organ for weight loss. The remaining 1.6 kilograms becomes water, which is excreted in urine, feces, sweat, breath, tears, and other bodily fluids.